No meaningful comparison has yet been made about which area of ​​our daily life has been most affected by the coronavirus epidemic, but culture is one of the biggest losers. This is also shown by the survey conducted by Népszava by the Institute of Publicus about changes in the cultural consumption of respondents.

Given the quarantine, it is not surprising that reading was the only activity that attracted more people than it was before the pandemic, with the number of people holding books in their hands by 15 per cent more than before. Moreover, more than a third of respondents – 37 percent – read multiple times a week. Theaters lost nearly half of their viewers due to the temporary hiatus of live productions, and film distributors were forced to incur even greater losses. It seems intuitive that the respondents, locked between four walls, would have spent much more time in front of the screens, but the growth was much less than expected. One important lesson learned from the survey is that audiences of dancers are the most loyal, as evidenced by the fact that realistic and virtual dance performances were regularly followed and followed up by 5 percent of the respondents. 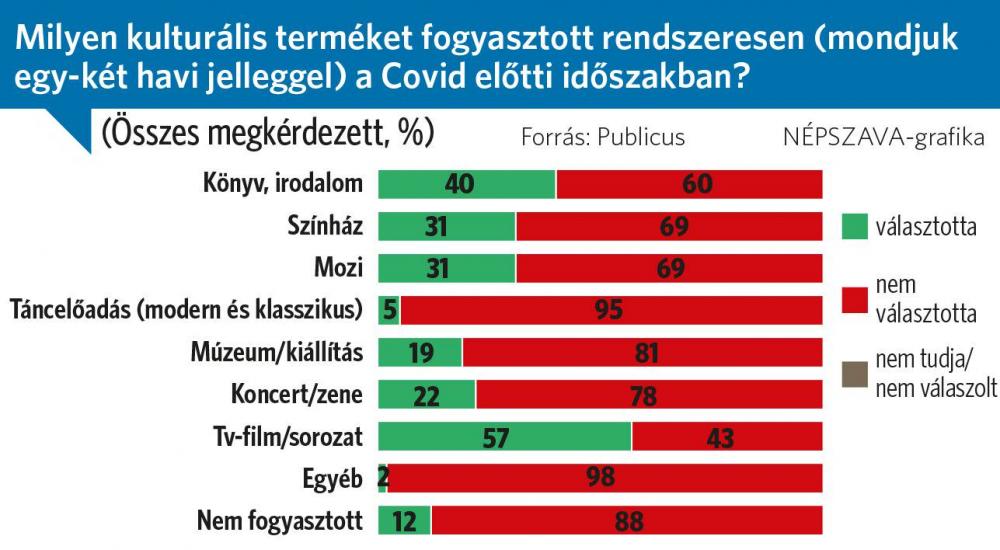 Although theater companies, bands, film distributors, and performers have done a lot and creativity to stay present with online events while in quarantine, only a few of those surveyed have taken advantage of this opportunity. Whereas before Spring 2020, 31 percent went to theater and cinema regularly, since then only 16 percent have seen a theatrical performance recorded or streamed directly over the Internet, and 12 percent have watched movies online. More than a fifth of respondents – 22 percent – attended concerts regularly before the pandemic, a decrease of 7 percent due to the move to online space. It’s worth noting, however, that interest in music is more common, with 4 percent going to virtual concert halls and 2 percent to virtual theater several times a week. The decrease in the number of visitors to museums and exhibitions has not been drastic, with 19% of respondents viewing exhibitions regularly, and 12% choosing online exhibitions. The result on television was staggering: it stands to reason that more people have been broadcasting on TV since the event stopped than before, but the rise is not very large: Before the pandemic, 57 percent, and since then 65 percent, have found themselves busy in front of Screen .. look at the traditional ratio, so-called use of linear television and broadcast services.

READ  Index - Economy - Katás: NAV has been warned of this deadline