Previously We have already reported itThe charging of the Samsung Galaxy S22 + and S22 Ultra 45W is actually slightly faster than the 25W solution on previous models, the difference is several times not noticeable, and now it is clear why.

One of the innovations on the two larger Galaxy S22 models has been 45W fast charging, which may encourage owners to buy a suitable charging head for their device (since there’s no adapter in the box). However, this seems somewhat unnecessary, as several tests have shown that recent phones charge slightly faster with a 45W charger than with a 25W charger.

The question correctly arises how this is possible, and why a 45W charger is not such an important step forward. Well, now the answer has arrived, because it is AndroidAuthority He also looked closely at Samsung’s solution.

As it turned out, the Galaxy S22 Ultra can capture 40-45W while charging for about 1 minute, after which the power drops significantly. The phone typically charges 30W in the first half hour, then slows down more, and from the 40th minute onwards, the 45W adapter charges much slower than the 25W adapter. Thus, in practice, the “faster” charging is almost nothing, even in good condition, we gain only a few minutes with it. 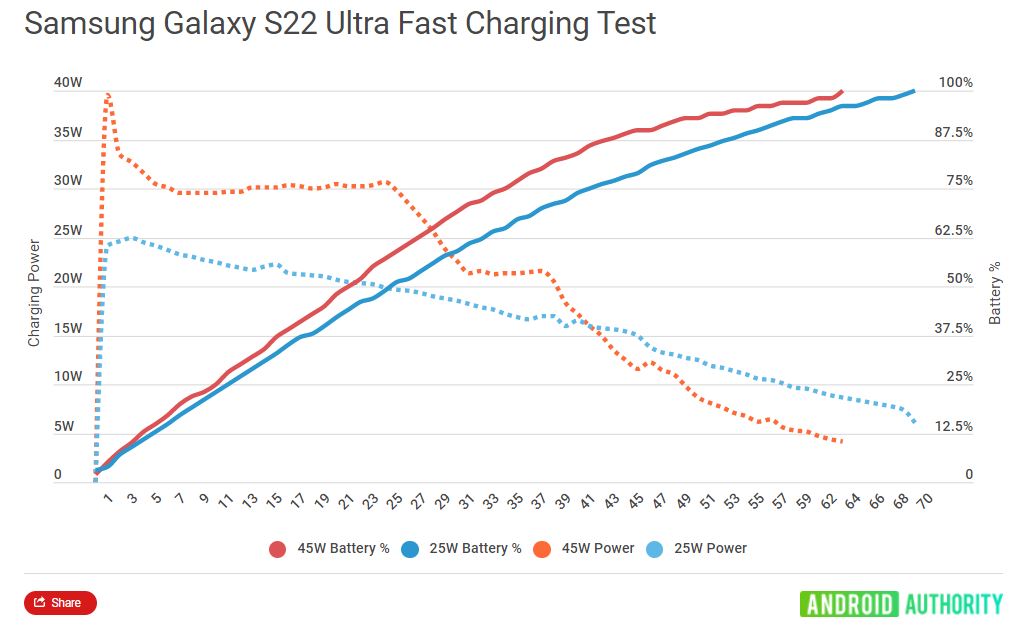 Of course, it’s understandable that Samsung doesn’t want to overload its portable batteries, they’ve been very careful about that since the Galaxy Note 7 scandal, but you can’t go without saying how tricky 45W fast charging the new high-end models are. Certainly many owners have a 25W adapter at home, and they may think it’s worth investing in a 45W charger as well, as their device supports it, but in reality there will be a noticeable acceleration.