As we expected based on the first couple of days of group stage play, many of the big guns were forced home early. from Qatar. The biggest surprise was the early eliminations of Germany and Belgium. Of course, there were also some pleasant surprises, and this category includes Australia’s progress ahead of Denmark, which is a secret favorite, and Tunisia, which beat the defending champions in the World Cup, or Japan’s performance in the group stage, which taught the Spaniards and Germans a lesson, Morocco’s progress, and South Korea’s achievement Against Uruguay and Ghana in a group. The other issue is that, with one exception, the world order has already been restored in the Round of 16.

to our compilation from last week Likewise, consider the evolution of the groups’ end results. Three countries – France, Brazil and Portugal – flawlessly made it to the final round, but they all fell short. This is also a good indicator of the unpredictability of the World Cup.

In Group A, the Netherlands finished undefeated and topped the Quartet with 7 points, which is worthy of the challenger, followed by Senegal, who defeated Ecuador 2-1 in the last round. The host nation, Qatar, went into the tournament with high hopes to no avail, eventually finishing the first ever World Winter Football Championship without a point, with just one goal.

In Group Two, England produced the most outstanding performance, and Gareth Southgate’s boys finished with seven points. In a heated battle for second place, the USA narrowly defeated Iran thanks to a Christian Pulisic goal. Here, Wales finished with just one goal, without a win.

Argentina found itself after the embarrassing defeat suffered by the Saudis, after Mexico also beat Poland 2-0, and finally confirmed the initial paper model, entering the top sixteen of Quad C. However, Lewandowski still had a chance, as Mexico unsuccessfully defeated Saudi Arabia 2-1, but the goal percentage was in favor of the Poles.

In the quadruple D, the defending Frenchman, who knew he was sure to advance, faced Tunisia in the second row, and this took its toll. The Africans – who have plenty of footballers who grew up in France, many of whom were born there in the first place – stunned Didier Deschamps’ crew 1-0 with a brilliant game, and FTC’s Issa Ledoni played brilliantly again, also providing the assist. Despite the historic victory, Tunisia still lost the continuation after losing to the Australians in the same way they lost to the Danes in the last round. Australia’s 6-point performance and lead is a huge upset, as is Denmark’s elimination. Kasper Hjulmand’s European semi-finalists were thought by many to be a secret favourite, and by comparison, the North came home winless, with just one point and the same number of strikes, as the last in the group.

The paper model was also overruled in Group E. The unexpected elimination of the Germans was already in the first round, after Japan defeated them 2-1. After that, Hansi Flick’s team clashed with the Spaniards, and then beat Costa Rica in a twisted match (4-2), but that proved not enough, after the Islanders also climbed on the Spaniards in the last round and walked as a group. leaders.

The Croatian-Belgian battle was preceded by a lot of interest in the quadruple F. Beforehand, one would have thought that this would decide the leader of the group at the last corner. By comparison, after ninety minutes without a goal, Belgium were eliminated, and World Cup silver medalists Croatia were forced into second place behind Morocco, but at least they advanced. This is the end of the golden generation for the Belgians, they returned home from the tournament in Russia four years ago with a bronze medal, but many have already experienced this as a disappointment. Then what do we say about the diagonal shape? Just one kick, and that too against Canada, which ended with no point…

Like the French, the Brazilians had fun in the final group stage. They lost to Cameroon by a last-minute goal in the quadruple, but ended up leading with 6 points. Switzerland occupied second place with the same number of points, but with a worse goal difference, after the Swiss beat the Serbs 3-2, who performed much worse than expected, as they conceded 8 goals and finished last in their group with only one point.

In Group H, Portugal opened with two convincing successes, but their perfect record against South Korea was also there: 1-2. Uruguay only found themselves at the end, but a 2-0 win against Ghana proved insufficient for salvation.

The group stage ended with none of the 32 national teams able to maintain their 100% record, but the Netherlands, England, Morocco and Croatia can say they finished the first stage undefeated. Qatar, Wales, Denmark and Canada were on the negative table without a win, the first and last of these not even scoring a single point. Germany, Uruguay and Belgium each took one victory, but based on the initial chances, these three national teams suffered the biggest blow, and the star players can only watch this World Cup with a remote control in their hands.

This is how we got to the elimination straight stage, where the world order has already been restored. The national teams that caused the biggest upset in the group stage – Australia, Japan and the Republic of Korea – were eliminated. 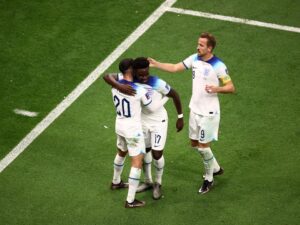 With two assists and a goal from Dumfries, the Netherlands confidently beat the United States 3-1. With football that reminds us of the best days of Lionel Messi and, by the way, with a beautiful goal, he helped Argentina see off Australia: 2-1. France showed with a great game of football that they will claim to defend the title. Kylian Mbappe doubled against the Poles, he already has five goals and is leading the scorers list. Veteran Olivier Giroud also scored a goal against Lewandowskis, and it was the 52nd goal of the AC Milan striker in the national colors, making him the record holder – by knocking down Thierry Henry. France brought home Poland, who again survived after 36 years, in the group stage with a score of 3-1. England did not spare Senegal: 3-0. To date, the Islanders have scored the most goals, twelve, shared by eight, which is certainly encouraging to continue. After a 1-1 draw in the round of 16 between Japan and Croatia, it ended in extra time and then a penalty shootout, where Dominik Levakovic was the hero. The Croatian goalkeeper saved three of Japan’s four attempts, but only one of his teammates fouled, so Zlatko Dalic’s boys are already among the meritorious eight regardless of their persistence. Brazil showed their strength against South Korea, in the first half they already cleared the field with the Asians, and a nervous Neymar scored from the penalty spot, making him the third Silica footballer to score in three different World Cup tournaments, along with the player. Pele and Ronaldo are seriously ill. After the break, Captain Tete’s jugglers brought me back from the relentless pace, and the opponent deserved his improvement: 4-1. Brazil is the only team that has already sent all 26 football players onto the field, against the Koreans the master also replaced his number three goalkeeper. On the other hand, the paper form was nullified in the Moorish-Hispanic meeting. After an unpleasant 120 minutes without a goal, the decision was made on penalties, during which the Spaniards could not score even once, but the North African goalkeeper Bono hit twice, allowing his team to advance. Fleet were eliminated in the round of 16 in much the same fashion as they were against the hosts four years earlier in Russia. The competition for the top sixteen ended with the match between Portugal and Switzerland, where the Lusitanias defeated Helvetians: 6-1. In particular, Goncalvo Ramos was in his place, replacing Ronaldo in the starting lineup and scoring a hat-trick.

The semi-final matches will be held on December 9, Friday, and the tenth, that is, Saturday. The semi-final matches will be held next week on Tuesday and Wednesday. The winner of the Dutch-Argentine battle will meet one of the Brazilian-Croatian duos, and in turn, the French-English qualifiers will compete with the best of the Moroccan-Portuguese doubles for a place in the final.

You can also read our article introducing the first FIFA Winter World Cup and analyzing the first stage of the group stage:

The first ever FIFA Winter World Cup kicks off on Sunday