“Now we have to get to a higher altitude,” Herzog told Bin Zayed. “This means further improving and strengthening our relations and involving more countries in the Abraham Accords.”

“We have built a very strong bridge between countries that we can be proud of,” bin Zayed told Herzog.

He also told his Israeli counterpart that Herzog should consider the UAE his “second home”.

Ahead of the meeting, Herzog said Israeli leaders should continue working to expand the Abraham Accords.

He said, “It started as an agreement, and turned into state-to-state relations, and now… countries want to update the agreements and work to expand them to include more countries.”

“For that, the Israeli leadership must understand that this challenge will continue,” he added, as opinion polls show support for the accords declining in all of Israel’s three new Arab partners.

In a speech in Abu Dhabi earlier Monday, Herzog focused on climate technologies, one of his top interests as president.

“There is no doubt that the future of humanity will depend on space,” he said. “However, for the time being, the ultimate value of space technologies lies in saving our already existing planet.”

Herzog praised the “advanced space partnership” with the UAE.

“Working together, our beautiful region can become a global hub for climate solutions,” Herzog said. “I believe that the UAE and Israel, together with our friends and partners, can lead the way for the entire region.”

Herzog’s quick visit to the UAE followed a brief trip to Bahrain, the first for an Israeli president to the island nation, which focused on untapped business opportunities between the two countries.

Upon his return to Israel on Monday, a member of Herzog’s entourage said the UAE and Bahrain wanted to be “part of the regional union that all the leaders are talking about.” 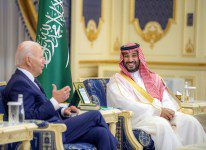 Netanyahu wants peace with Saudi Arabia. Perhaps the Saudis would like that, too. But the White House has other ideas, Tony Badran wrote in his tabloid columns.