Significantly, the number of people needing a ventilator in the fourth wave of the Delta-type coronavirus epidemic in Israel increased from twenty to 42, ynet reported on the news portal ynet on Monday.

Of more than 2,000 new infections identified in Israel each day for a week, the number on Sunday was 2,114. 2.95 percent of tests were positive, and nearly 57 percent of new registrants had previously been vaccinated against SARS-CoV- 2 (Covid-19).

Of the 19,436 active cases, 385 are currently hospitalized, of whom 212 are critically ill, 42 need ventilator assistance.

About 10 percent of the new aircraft carriers identified on Sunday returned from abroad and were screened through mandatory testing at the airport after landing. Most, 73, came from Turkey and 34 brought the virus home from Greece.

With the spread of the delta variant, the number of infected settlements has also increased significantly

The Ministry of Health has already designated 13 severely infected settlements as “red”, 40 places considered moderately infected “orange”, 70 towns and villages are lightly classified as “yellow”, and only 157 places can be said to be “green” in the absence of virus vectors or Having a few of them.

The head of the Health Ministry said that if the increase in the number of critically ill patients cannot be controlled, a nationwide lockdown will be imposed in Israel for the fourth time in a few weeks.

For now, they are primarily trying to stop the spread of the virus through a vaccination campaign, and people over 60 began being vaccinated with the third dose on Sunday. On the first day, 45,000 people were vaccinated and more than 100,000 people in the age group were asked to take the vaccine.

The government plans to vaccinate by the end of the month, the beginning of the school year, for the very first elderly, who have already been vaccinated in December and January, who may have a significant reduction in protection and are more likely to contract the disease.

The Ministry of Health is currently planning to tighten the “green label”, wanting to ensure that children under the age of 12 who have not been vaccinated can participate in events of more than a hundred people only with negative test results.

They have also begun to develop the school year plan, with group serological tests prepared for unvaccinated children to see if their symptoms may be asymptomatic.

Commercial TV12 reported that vaccinated and recovered people will be free to visit institutions, and others will have to take a quick test in the morning to enter classes.

The proportion of COVID-19 vaccines: 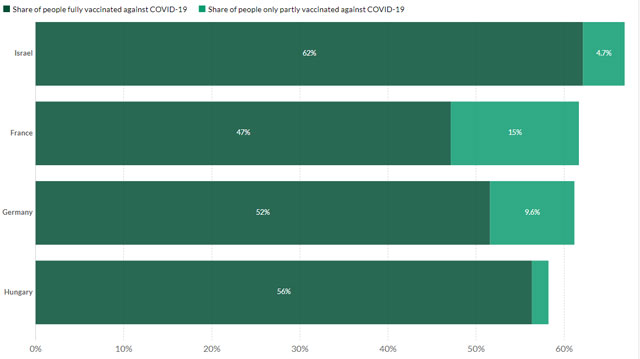 The vaccination campaign, which began in late December, has so far vaccinated 5,787,665 (over twelve years old) of about 9.3 million people in Israel with the Pfizer vaccine at least once. This represents 62.24 percent of the country’s population, however, and has not been shown to be sufficient to reduce the epidemic caused by the more contagious deltavirus variant. Since the outbreak of the epidemic, 877,316 cases of coronavirus have been identified. 6,477 people have died of the disease in Israel since February last year.

READ  Filler tricks are not only for beginners: this way the crop will be abundant even in the smallest garden