In the 1980s, Russian experts suspected the presence of dangerous oil and gas resources in vast, almost inaccessible, swampy areas. However, the research work required a special transport machine capable of delivering equipment to the target area even in rough terrain.

That is why they began to develop the SVG-701 Yamal tracked transmission. The Russians were not alone in embarking on a serious project, the Canadian company Foremost Industries, with experience in similar fields, was also involved in the planning.

They already had a similar build, also with two tracks, the Husky 8. The SVG-701 was based on this model, which included a 715hp Detroit V8, as well as another diesel unit that served as a generator.

The SVG-701 carried diesel in a 2120-liter tank, but that wasn’t why it was so special. Trails were the key to walking in the swamps. In the double design unit, instead of metal rollers, classic tires were placed, which also served as shock absorbers.

The width of these tracks was 1.85 meters on the ground, which led to a very low ground pressure. A pressure of 0.22 kg/cm2 hits the ground when empty, and 0.38 when loaded, which is an telling value when we know that the average person exerts a pressure of 0.70 kg/cm2. 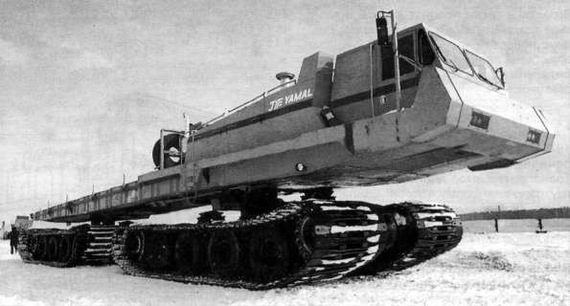 Thus, the 27.5-ton machine could carry 70 tons of cargo on its back, which could be almost anything, since the cargo area was 12.5 meters long and 4.5 meters wide. Thus, the aircraft itself can be called a real giant, its total length is 20.56 meters, and the cabin is 4.5 meters high from the ground.

The maximum speed of the machine is only 15 km / h, but no one is in a hurry in the swamp, only getting to the destination is important. Although the build was not amphibious, it still happily stumbles in 2.6 meters of water. 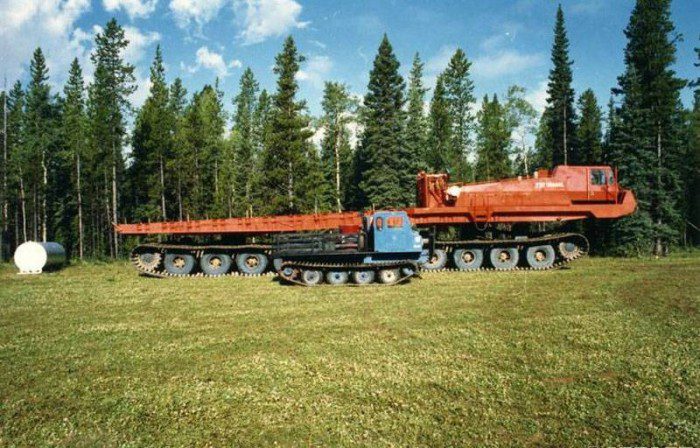 Although it was a promising special car, and the developers eliminated more and more problems during the tests, the economic downturn in the 1990s stopped serial production. The two current models around the Arctic Circle have continued to be used, but their current fate is shrouded in mystery, and there is no exact information about their whereabouts.