In many cemeteries we can also discover secrets of nature.

“I love cemeteries. I simply and normally love their colors, autumn yellows, angry green, and the silence that surrounds them like a silent thunderstorm.” – Dezső Kosztolányi wrote (Life, October 30, 1910, under the pseudonym Vampa).

Cemeteries are first seen as a place of worship, but as Dezső Kosztolányi’s words show, tomb gardens, in addition to their primary function, can also be important parts of the landscape.

Balaton Uplands National Park District I mentioned nowHow important are the cemetery gardens to their jurisdiction from a landscape conservation point of view.

National Park employees regularly conduct individual landscaping value surveys, during which both natural and artificial values ​​are examined. Interestingly, tomb gardens move along the boundaries of these two groups, although they are primarily linked to human activity, they are often an integral part of natural environments and landscapes. Tomb gardens are not only burial sites, they are also keepers of the fingerprints of previous generations in terms of tradition, use of materials, shape and use of plants.

What distinguishes the western villages of Al-Zala they examined is that despite their small size, there are several cemeteries in the settlements. Locals generally consider these tombs to be both old and new. Both types have their own characteristics.

Old and new cemeteries differ in many of their characteristics (Photo: Balaton Uplands National Park Directorate)

It can generally be said that ancient tombs were located on hillsides or hilltops near the settlement. Therefore, it can be easily seen from the farthest part of the settlement, and there is a beautiful view of the settlement and the surrounding landscape. Cemeteries and tombstones here distinguish a slightly irregular but well-arranged arrangement, which often falls in the shade of a decorative tree or fruit tree. Many tomb gardens now preserve landscape species that are no longer used or have disappeared, and sometimes rare protected plant species, so they also play an important role in nature conservation.

On the other hand, the new graves are usually located in a flat area within the settlement. Here, gravestones are lined up next to each other, accompanied by rows of planted trees. Much emphasis is often placed on fence and gates elements surrounding burials in new cemeteries. 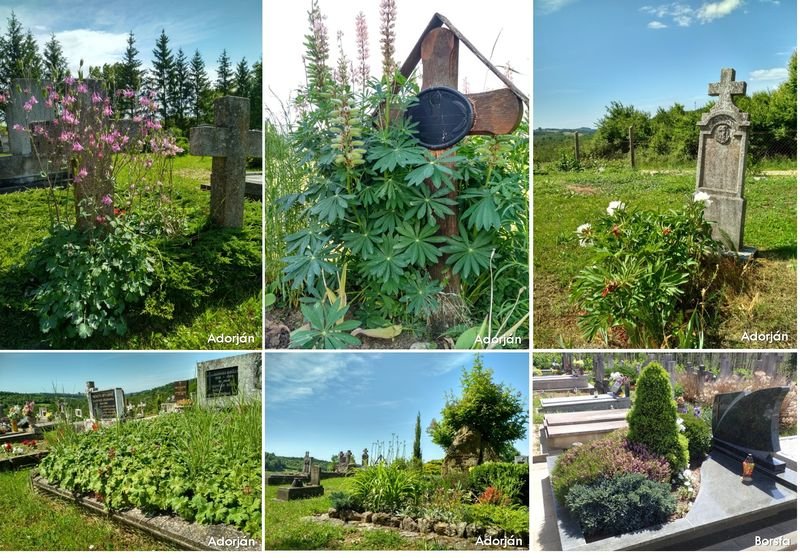 There is a distinct difference in the use of tombstones between the two types of cemeteries, as in the case of ancient tombs, the use of small natural stone, carved and wood is the norm, while in new cemeteries we can find a large number of modern marble or artificial stone tombstones.

However, the common feature is that in the center of the cemetery or at its entrance there is a central cross with a body, and in the places the benches, and shaded benches are used for rest, contemplation and silence.

Tomb gardens are an important part of the ecosystem of settlements. In many cases, they play an important role in the image of the settlement, and also act as a point of reference and fill the scene with a cult surplus.