Formula 1 is the king of motorsport. Hundreds of thousands of people visit each competition in person, and billions watch the grand prize in front of their television sets every year. The Accelerated Circus kicked off for the 73rd time this year on March 20 in Bahrain. On July 31, the Hungarian Grand Prix was held for the 37th time in Hungary, bringing Max Verstappen to his 28th victory. We present competitors, world champions, and courses of the past decades in an interactive compilation.

On the Átló . data visualization page Back In our latest interactive material, we present the most interesting statistics for the Formula 1 World Championship, which has been held every year since 1950. In the work divided into four chapters, we have taken a closer look at the victories and successes of the World Championship for competitors, and the continued success of teams many times over the years, And the tracks driven by the contenders hundreds of kilometers in the Grand Prix, the importance of pit speed.

The 2021 season was very close, even in the last race we were close to Hamilton and Verstappen. In recent years, usually in the last three or four races, it was already possible to find out the winner, because by that time he had already gained an irreplaceable advantage. Recently, the period between 2001-2004 was also interesting. Ferrari’s dominance was also evident in the excitement of the season. Schumacher’s victory was already known in the last five or six races, and second place several times was his teammate Barrichello.

Formula 1 is a European sport. This is evidenced not only by the large number of historical European tracks, but also by the drivers’ country of origin. Most successful pilots come from Great Britain and Germany. Brazil, Argentina, Australia and South Africa also play a prominent role in the history of the sport.

“Races are won on the track. The world championships are in the factory.” – The Mercedes team wrote in 2019. A driver’s success is greatly influenced by the team he competes for. Formula 1 managers quickly noticed this phenomenon, so they presented the World Constructors’ Championship title in 1958, before the eighth season following the first race. The team championship makes it possible to reward not only the individual successes of the drivers, but also the annual performance of the manufacturers, which begins long before the start of the season, with the design of the cars. 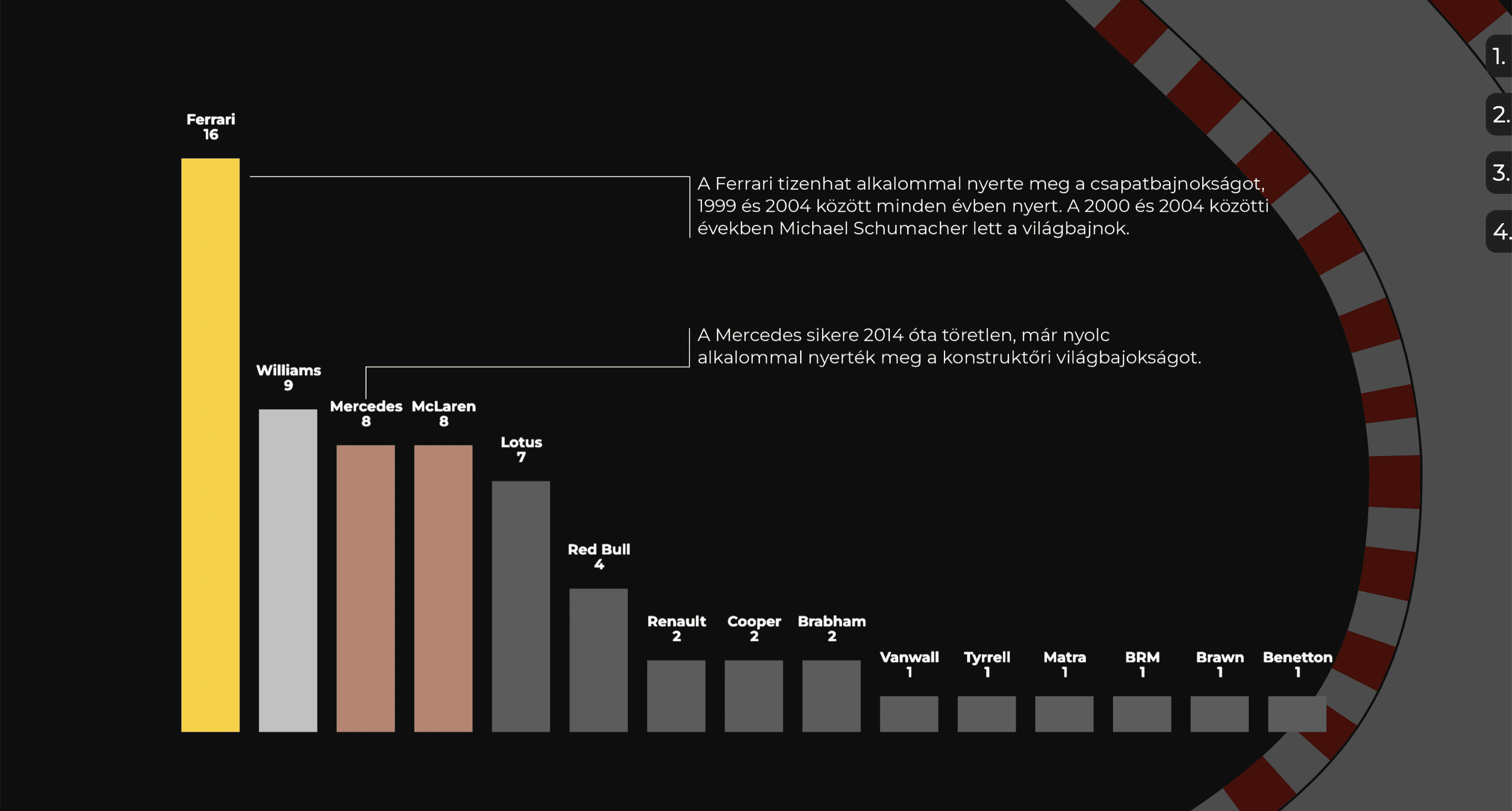 A total of 76 tracks have been used in Formula 1 so far, and one – the new track in Las Vegas – is sure to be included in the 2023 season. The individual circuit lines are stunning. In addition to classic racing tracks, urban tracks are popular in sports (there are currently 7 such tracks on the racing calendar), and in the past, especially in the 1950s and 1960s, races were also organized on road tracks.

Animation of the tracks used in the Formula 1 race so far (click to play to start!)

In the material, you can also separately select the tracks used in the 2022 season, and you can see the “race” of the drivers who ran the fastest lap each year on a detailed map. Since 2007, DHL has awarded the Fastest Lap to the fastest driver in a season. Lewis Hamilton won this award most often – six times, the last of which was in 2021.

Hungry race animations and statistics for each race (click play to start!)

Successful racing also requires good tires – since refueling was banned in early 2010, the pit stop has focused on changing tires in many ways. On the other hand, competitors can catch up to the opponent in front of them with a new set of tires, but since 2017, the speed of the team changing the wheel has also been rewarded with a DHL Fastest Pit Stop award, which indicates when to change the wheel. 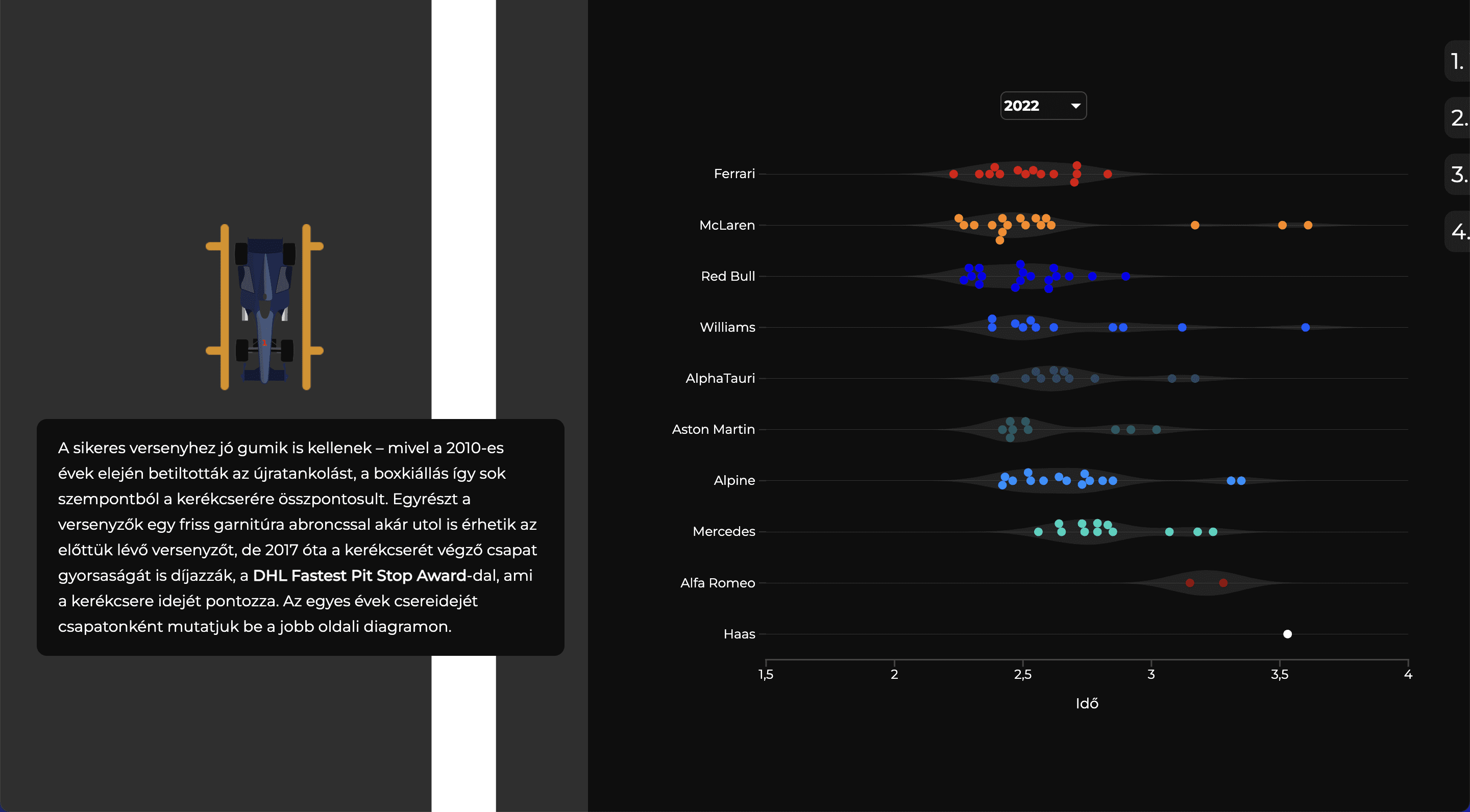 Screenshot of the hole corridor separation

The full interactive material can be found below Link:

Formula 1 – The story of speed in the circus

To view the material, visit the website on a desktop computer! Since 1950, the number of competitions has tripled. The circus racing calendar, which began with seven races, settled into 14-16 races by the end of the 1970s and early 1980s. Since then, it has grown even more: this year and last year, drivers have to do their best in 22-22 races.